A Volatility Based Oscillator Indicator for Traders

A Volatility Based Momentum Oscillator

Defining a technical indicator which delineates between steady and accelerated price movements is straightforward:

Based upon the definition above, a technical indicator can be created in charting software. For example, using the TradingView website, a custom volatility based momentum oscillator (VBMO) can be created with scripting code like the following:

The VBMO indicator has also been published on TraderView, and is available for use with your own charts.

Below is an example chart with the VBMO Indicator plotted below a candlestick chart. In this example, the Euro / U.S. Dollar currency pair is shown on a 4 hour timeframe.

As shown in the example above, most of the time, VBMO will fall between -2 and 2. Indicator values above 2 or below -2 represent overbought and oversold conditions respectively. In extreme market conditions, however, values can go well above 2 or well below -2.

The unit for the VBMO indicator is multiples of volatility (MoV). Indicator values increase or decrease as price diverges or converges with the exponential moving average. Notably, since indicator values are normalized using the historical volatility of the underlying trading instrument, VBMO has the same unit and scale for any instrument or timeframe.

Similar to other technical indicators, VBMO is not intended to be used in isolation. The intent is for this indicator to be incorporated into a broader trading strategy and plan, interpreted in the context of current market conditions (e.g. range-bound vs trending markets), and combined with other analysis and technical indicators to confirm trading signals. In this regard, some examples where VBMO can be applied include the following:

The following examples show how VBMO can be used with different trading instruments and timeframes, and illustrates how the indicator can be interpreted in different market conditions or combined with other types of analyses.

Tesla (TSLA) trades within a range: Since early 2018, Tesla has basically traded in a range between $260 and $380. This has presented several opportunities for long and short trades within this range. In this case, the VBMO indicator helps to identify possible turning points.

Forex flash crash: In early 2019, the USDJPY currency pair and similar pairs underwent a steep but temporary price drop, or flash crash. This resulted in extreme values for the VBMO indicator. Even though VBMO values will typically oscillate between -2 and 2, extreme values are also possible. 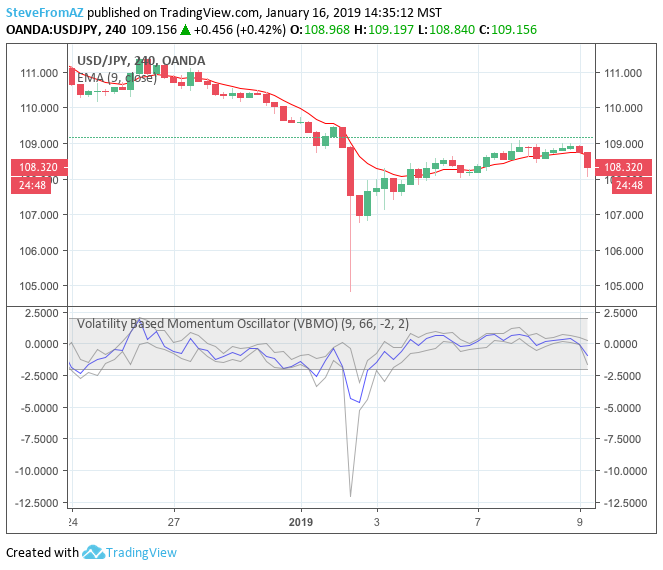 Nvidia (NVDA) hits a climax top right before earnings: Back in May 2018, Nvidia’s stock price moved higher going into earnings. In the daily chart below, VBMO signals an overbought level just before the earnings announcement. Depending on one’s trading strategy and risk management, this would have been a good time to sell into strength and take some profits. 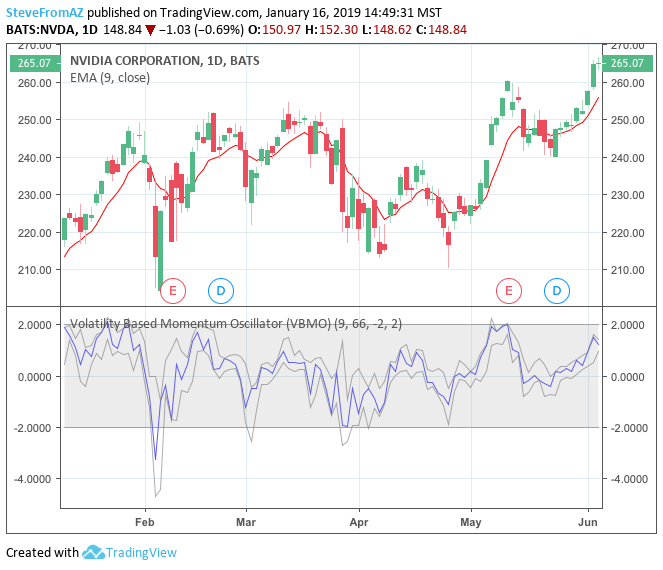 Bitcoin (BTC/USD) goes parabolic: Up until December 2017, the price of Bitcoin, denominated in USD, had been rising very quickly. The initial price movement resulted in an extreme VBMO value over 12. However, after this initial parabolic move, there was a divergence, since price continued higher but VBMO didn’t match previous levels. Based upon this divergence, an astute trader would have been prepared for a possible reversal. 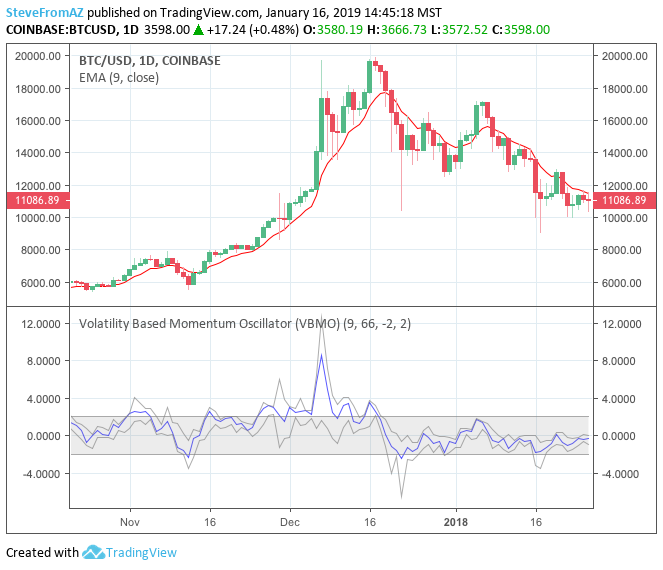 A volatility based momentum oscillator (VBMO) is calculated using a short-term moving average, the distance of price from this moving average, and the trading instrument’s historical volatility. Even though VBMO’s calculation is relatively simple, the resulting values can help traders identify, analyze and act upon many scenarios, such as climax tops, reversals, and capitulation. Moreover, since the units and scale for VBMO are always the same, the indicator can be used in a consistent manner across multiple timeframes and instruments.